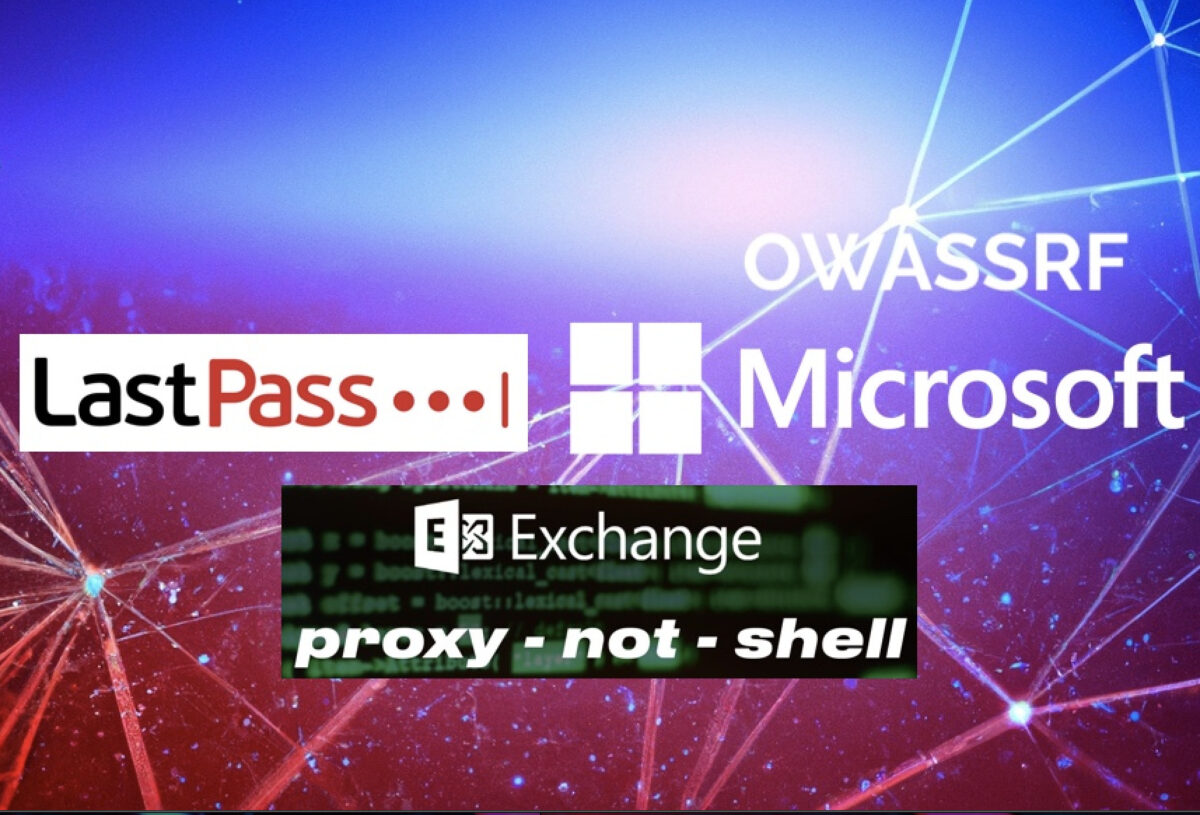 This week we deep dive into the updates of proxynoshell, New Microsoft Exchanges vulnerabilities being exploited with OWASSRF, Rackspace data breach and Last Pass vault breach potential and class action

A new strain of attacks is being used to compromise exchange endpoints. Attacker organizations like play leverage  this chaining methodology to exploit vulnerable exchange servers

The exploit is used to deploy persistent vulnerability systems that are later used to breach organizations.

From latest Microsoft update: Microsoft released security updates for CVE-2022-41040 and CVE-2022-41082. We recommend that customers protect their organizations by applying the updates immediately to affected systems. The options described in the Mitigations section are no longer recommended. For more information, review the Exchange Team blog.

OWASSRF is a new exploit used by malicious actors to bypass the mitigations suggested by Microsoft for the Microsoft Exchange vulnerabilities CVE-2022-41040 and CVE-2022-41082. These vulnerabilities, which allow for remote code execution and server-side request forgery, were initially referred to as ProxyNotShell. However, the new OWASSRF exploit is likely to target the critical security flaw CVE-2022-41080, which allows for remote privilege escalation on Exchange servers and has not previously been observed being exploited in the wild. This highlights the importance of regularly updating and patching your cloud systems to prevent vulnerabilities like these from being exploited.

What are Server-Side Request Forgery and Remote Code Execution Attacks?

Server-Side Request Forgery (SSRF) is an attack involving attackers accessing an application supporting data imports from URLs. It allows them to abuse the functionality of a server or manipulate the URLs by replacing them with new ones. When an attacker controls the URLs, they can give commands to the servers to read data to the tampered/altered URL. The attacker can use this type of attack to tricks the server into sending malicious requests to other servers or services that are accessible by the server, such as internal network services or databases. This attack can be used to gain access to sensitive information or launch other types of attacks, such as denial of service (DoS) attacks.

On the other hand, Remote Code Execution (RCE) involves an attacker executing malicious code on the systems remotely. Once the hacker gets into the system through RCE vulnerability, he can process malware execution or even have complete control over the affected system.

On December 20th, researchers detected a new exploit used by malicious actors to bypass the mitigations suggested by Microsoft and dub it OWASSRF. While the original ProxyNotShell exploits targeted CVE-2022-41040, the flaw used by the new exploit is likely to be CVE-2022-41080. This critical security flaw allows for remote privilege escalation on Exchange servers and has not previously been observed being exploited in the wild.

The following on-prem versions of Exchange that have not applied the November 8, 2022 KB5019758 update are vulnerable:

Microsoft, for its part, has tagged CVE-2022-41080 with an “Exploitation More Likely” assessment, implying despite fixes and countermeasures an attacker can create exploit code that could be utilized to weaponize the flaw reliably.

Crowdstrike noticed that the initial access to the target environments was not achieved by directly exploiting CVE-2022-41040, but rather through the OWA endpoint.

How do attackers chain the vulnerabilities?

How do this vulnerability differ?

Microsoft released a blog advocating for a custom rewrite rule inside the Microsoft IIS server supporting Exchange. This rule was designed to match the decoded URI of any incoming request with the regex (?=.*autodiscover)(?=.*powershell), so the request is dropped when the decoded URI matches this regex. Microsoft provided the same rule through the Exchange Emergency Mitigation Service for newer on-premises servers, which installs it automatically.

This first step provides a SSRF equivalent to the Autodiscover technique used in ProxyNotShell exploitation. The second step is simply the same exploit used in the second step of ProxyNotShell, allowing code execution through PowerShell remoting.

Suggested next steps and update

All details in Microsoft blog:

Security Updates are available in a self-extracting auto-elevating .exe package and the original update packages (.msp files), which can be downloaded from the Microsoft Update Catalog.

The November 2022 SUs are available for the following specific versions of Exchange Server:

More details about specific CVEs can be found in the Security Update Guide (filter on Exchange Server under Product Family).

The following update paths are available:

Should the email recipient be located outside of Colombia, the attack sequence is aborted, and the victim is redirected to the official website of the Colombian border control agency, Migración Colombia.

We are investigating an issue that is affecting our Hosted Exchange environments. More details will be posted as they become available.

On Jan 6th the online provider confirmed it was ransomware

This zero-day exploit is associated with CVE-2022-41080,” the Texas-based company said. “Microsoft disclosed CVE-2022-41080 as a privilege escalation vulnerability and did not include notes for [it] being part of a remote code execution chain that was exploitable.”

the threat actor accessed the Personal Storage Table (.PST) of 27 customers out of a total of nearly 30,000 customers on the Hosted Exchange email environment.

A new technique, dubbed OWASSRF, employed by the Play ransomware actors was leveraged for this attack.

The mechanism targets Exchange servers that are unpatched against the ProxyNotShell vulnerabilities (CVE-2022-41040 and CVE-2022-41082) but have in place URL rewrite mitigations for the Autodiscover endpoint.

Last Pass did detect, back in August 2022, threat actors accessing a different part of the organizational’s data and user data. The threat actors did access their cloud systems and repositories. At the time, the last pass notified users that nothing was accessed.

Although the hackers did obtain some of LastPass’s source code and “proprietary LastPass technical information,” the company claims there is no evidence that user data or encrypted password vaults were stolen. The LastPass statement states:

“In response to the incident, we have deployed containment and mitigation measures and engaged a leading cybersecurity and forensics firm.”

Based on our investigation, we have learned that an unknown threat actor accessed a cloud-based storage environment leveraging information obtained from the incident we previously disclosed in August of 2022.

The vault files are encrypted, but threat actors could decrypt – unlikely without access to additional information. Moreover, each vault has a different key, so each must be decrypted individually. Considering the access to the source code, the threat actors may try additional attempts to get material pertaining to the user domain and accelerate the breach.

Nonetheless, some of the information in the vault are unencrypted, so this might facilitate the attackers to speculate on the key, reducing the space of key brute-forcing and hence accelerating possible access.

The breach includes other customer data, including names, email addresses, phone numbers, and billing information. And LastPass has long been criticized for storing its vault data in a hybrid format where items like passwords are encrypted but other information, like URLs, are not.

According to last pass latest announcement

These encrypted fields remain secured with 256-bit AES encryption and can only be decrypted with a unique encryption key derived from each user’s master password using our Zero Knowledge architecture. As a reminder, the master password is never known to LastPass and is not stored or maintained by LastPass.

Should you stop using a password manager and storing your keys in another vault/document? Probably not, but be mindful of classic password hygiene and rules and rotate your passwords.

There has been a lot of speculation about vault encryption and actors from nation-state breaking the keys.

Without specific knowledge of keys and password brute force is the only logical method.

A LastPass user has filed a class-action lawsuit against the password management provider for failing to prevent a recent, staggering data breach. The lawsuit, filed this week in the US district court in Massachusetts, comes from an anonymous LastPass user named John Doe